Adipose derived stem cells (ADSCs) are among the most investigated and used cells in the field of regenerative medicine. ADSCs are found in the stromal vascular fraction (SVF) of the adipose tissue. The SVF contains large numbers of cells composing interrelated cell populations: ADSC progenitors, pericytes, endothelial progenitor cells, and transit amplifying cells.

In the last 15 years, a large body of work conducted on ADSCs reported their capability to differentiate into multiple cell types, including adipocytes, chondrocytes, myocytes, hepatocytes, endothelial cells – both in vitro and in vivo. Also, ADSCs display the ability to secrete bioactive molecules which stimulate angiogenesis and have antifibrotic, antiapoptotic and immune-modulatory properties. Moreover, SVF/ADSCs induce the secretion of cytokines and growth factors which promote angiogenesis and thus the revascularization of fat grafts.

Since 2015 A. Gennai et al. have been publishing several studies (see references) about the new tissue graft techniques S.E.F.F.I. and MicroS.E.F.F.I.. These techniques aim to graft adipose tissue including the stromal vascular fraction (SVF) and Adipose Derived Stem Cells (ADSCs) contained therein, in order to achieve a skin enhancement and volume restoration of the face. The Authors proved that, using special cannula with very small side ports holes, the adipose tissue can be harvested so as to select small cellular clusters that don’t need any kind of manipulation in order to fluidify the tissue.

SEFFI and MicroSEFFI are now among the most used techniques addressed to regenerate the skin and restore the volume for facial rejuvenation.

In the light of this evidence the Regenerative Therapy has always been only in the hands of surgeons and not open to aesthetic physicians or dermatologists.

From this original idea SEFFILINE developed SEFFIHAIR®:
it’s an all-in-one and disposable medical device to allow all doctors to perform the autologous regenerative hair loss treatment in their facility in a safe, easy, effective way.

Treatment with the SEFFIHAIR® medical device involves the autologous and homologous graft of the Vasculo Stromal component (SVF) of the adipose tissue selected with the SEFFI (Superficial Enhanced Fluid Fat Injection) technique. Numerous scientific papers have demonstrated the efficacy of regenerative therapy with SVF and ADSCs in the treatment of androgenetic alopecia; recent studies have also shown efficacy in alopecia areata.

Treatment with the SEFFIHAIR® medical device is indicated in the following conditions:
– androgenetic alopecia.

Some international papers report the effectiveness of the SVF treatment also in:
– alopecia areata.

Therefore a careful diagnosis is essential before starting the treatment.

It affects 70% of men and 40% of women at a certain stage of their life. Men typically show a recession of the hairline at the temples and hair loss at the vertex, while women normally show a widespread thinning over the whole upper part of the scalp.

Androgenetic hair loss in men begins above the temples and in the center of the skull. Usually the strip of hair on the sides and behind the head is maintained.

Androgenetic alopecia in women is colloquially referred to as ‘female pattern baldness’, although its characteristics may also occur in men. It usually causes widespread thinning without a hairline recession, and like the male counterpart, it rarely leads to a complete hair loss.

In genetically predisposed subjects one of the causes of androgenetic alopecia is dihydrotestosterone (DHT), which derives from testosterone by the action of 5α-reductase. The miniaturization of the bulb occurs due to the transformation of testosterone into its most active metabolite, dihydrotestosterone (DHT). Such miniaturization can lead to the final death of the bulb and an irreversible hair loss. DHT promotes the growth of body hair and beard and can negatively affect the prostate and also the hair. There is still no absolute certainty about the genes causing androgenetic alopecia. Certainly, the genes that control the 5α-reductase enzymes are responsible. Actually, it has been shown that most of the genes involved reside on the X chromosome, that is the one that the mother transmits to her son, or that mother and father transmit to their daughter. Heredity towards a male child is greater according to the X chromosome that the mother inherited from her father, therefore the greater transmission occurs from the maternal grandfather to grandson and not from father to son. The fundamental pathological process consists in the acceleration, under androgenetic stimulation, of the mitotic phase of the hair cycle (anagen I-V) and in the consequent reduction of the differentiation phase, which is normally very long. Since the latter is necessarily incomplete, the stem that will derive from it will be thinner and shorter (vellus).

Generally, in men we see a receding hairline, i.e. in the front part of the head the hair becomes thinner and thinner. Later the same happens in the vertex. Finally, baldness affects the entire upper part of the head. At a later age, atrophic phenomena of the scalp – which becomes thin and shiny – overlap. At this stage the vellus disappears.

A second pathological process consists in the loss of the individuality of the papillary cycles (characteristic of the normal adult scalp) and therefore of their synchronization. This phenomenon is due to the reduction in the duration of the differentiation phase.

A third phenomenon is the increased kenogen phase. When the hair shaft comes off at the end of the telogen, the follicle is already occupied by another one in advanced anagen phase. An interval can occur between the fall of the hair in telogen and its replacement with the new in anagen: during this physiological interval (kenogen), the follicle remains empty.

In androgenetic baldness only the hair in the frontal region is lost because in this zone the 5α-reductase is more active, therefore a greater quantity of DHT concentrates there. In addition, also blood circulation comes into play. In fact, the frontal region is the most peripheral part of the scalp blood circulation, and therefore the one that is most subject to vessel atrophy. In any case, feeding the bulbs is a critical factor.

Another molecule favoring androgenetic alopecia in genetically predisposed subjects is prostaglandin D2 (PGD2), mediator of inflammation. Clearly also deficiencies of micronutrients and stress can favor androgenetic alopecia in genetically predisposed subjects. Diseases such as endocrinopathies (such as GH deficiency, hypothyroidism, menopause, polycystic ovaries and virilizing tumors) can cause baldness.

Many studies have demonstrated the efficacy and safety of autologous tissue graft containing SVF and ADSCs:

EXCLUSION FROM THE TREATMENT

As in all multifactorial pathologies, therapeutic combination is the one that achieves the best results. Regenerative therapy is indicated in all stages of androgenetic alopecia: certainly, in the advanced stages (Norwood Hamilton Scale V-VI-VII) it is indicated in association with hair transplantation. Regenerative therapy is recommended in preparation for surgery and post-intervention maintenance.

In order to reach the follicle, the implant must be performed with the following method:

Results will be appreciable after 4-6 months.

Alopecia areata is a disease in which the sudden fall of the hair, or body hair, typically occurs in hairless or aerial patches. Usually the first patches appear in the scalp and, in most cases, they resolve spontaneously, without showing signs of scarring. In about 1% of cases the pathology may extend to the entire scalp (total alopecia, TA) or to the whole body (universal alopecia, UA) with the total loss of all body hair.

Alopecia areata has an immunopathological component (often due to the attack of IgE antibodies, those specific to allergies, or more generally of the antigens of second-class human leukocytes and T lymphocytes); in essence, an abnormal immune reaction is produced that temporarily and locally damages hair follicles. Moreover, it depends also on genetics, in fact this condition seems to affect people who have a genetic predisposition. Psychological stress is never the cause but, it is seen as an element that worsens the pathology.

Clinical data show that patients with Alopecia Areata (AA) showed hair growth after ADSC grafting. Cytometry has shown the effect of ADSCs on Th2 cytokine regulation and in balancing Th1 / Th2 / Th3 cytokine production. Furthermore, immunohistochemical studies have shown the creation of a “ring of growth factor β1 (TGF-β1) formation” around the follicle, which seems to protect the follicle from the autoimmune attack.

Other studies have shown the importance of Treg cells (Regulatory T cells, a heterogeneous line of lymphocytes also present in adipose tissue) in stimulating the follicle through stimulation and proliferation of epithelial stem cells. Tregs stimulate the follicle (HF) by activating follicular stem cells (HFSC). 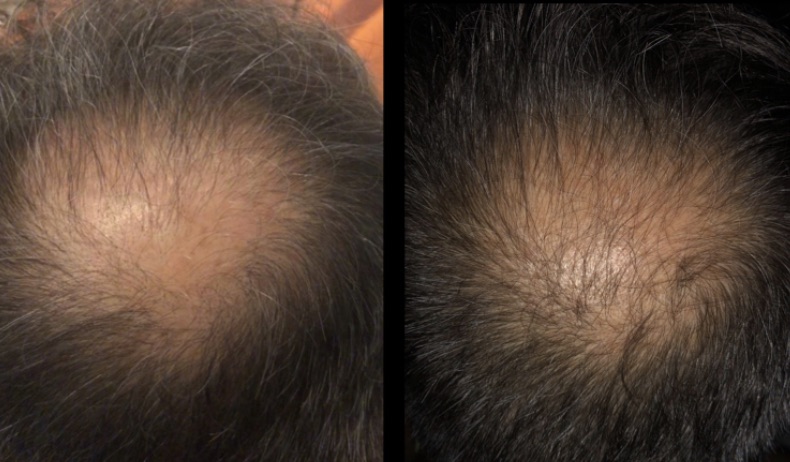 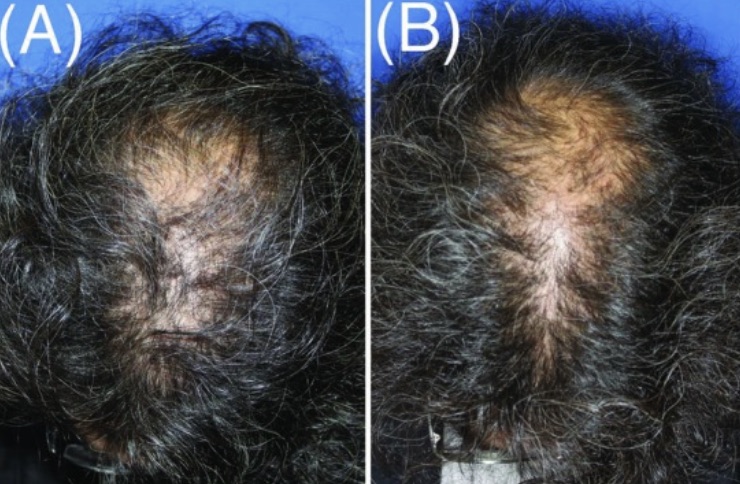 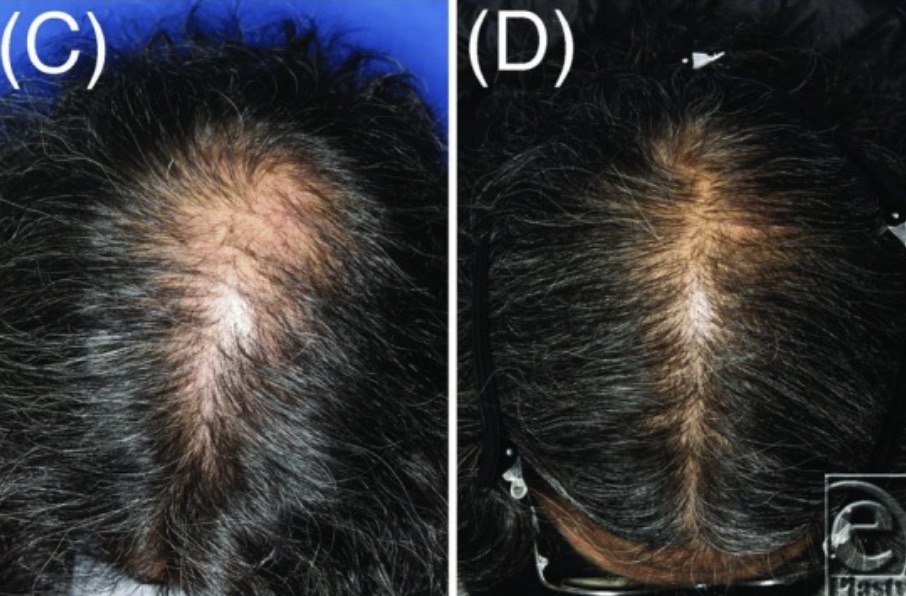 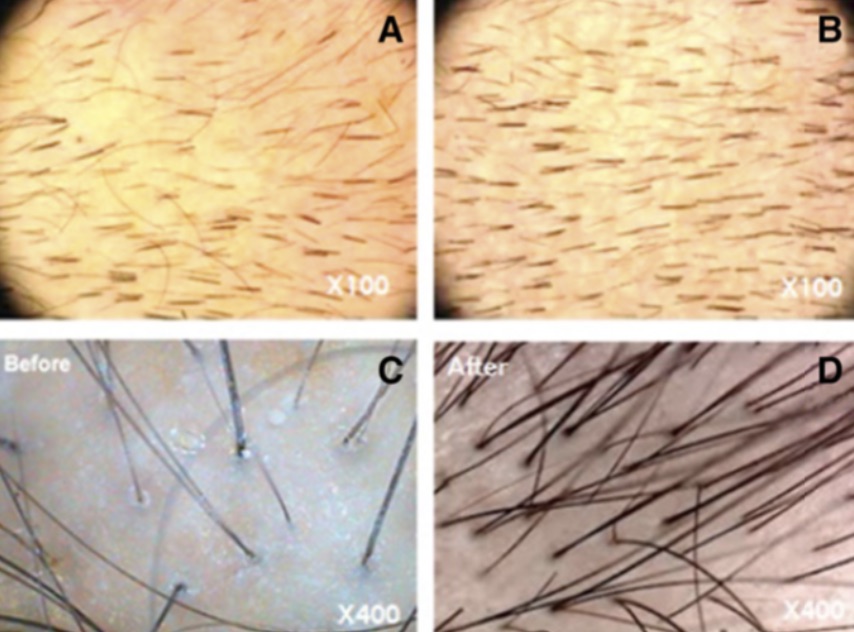